The special marker pens to be used for Presidential polls

The Election Commission has announced that electors in the Presidential polls will be provided with a special pen to mark their vote. This pen has been created by Mysuru-based firm Mysore Paints and Varnish Limited, which is also the sole supplier of the indelible ink used for all elections 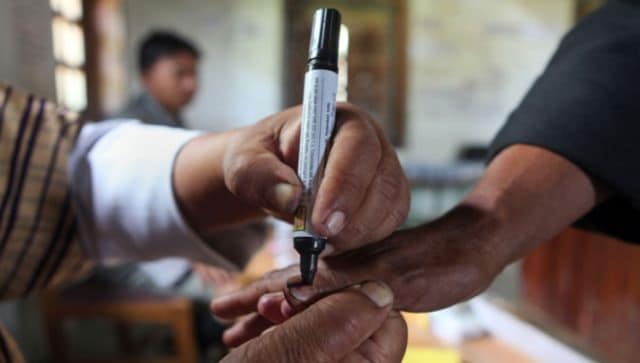 The marker pen created by Mysore Paints and Varnish Limited can apply a mark on 1,000 voters. Image used for representational purposes/AP

The buzz around the Presidential elections, scheduled for 18 July, is growing day by day.

There has been a lot of focus on the Opposition’s efforts to present a singular candidate for the elections, with Sharad Pawar’s name being at the forefront.

At the time same time, the Election Commission (EC), which will oversee the exercise that will replace Ram Nath Kovind at Rashtrapati Bhavan, is also gearing up for the polls and making all necessary arrangements.

In the run-up to the 16th Presidential elections, the polling body announced that it would be providing particular pens to electors to mark their vote on ballot papers. The pen will be given to the electors in the polling station by the designated official when the ballot paper is handed over.

According to the EC, voting by using any other pen shall lead to invalidation of the vote at the time of counting.

Take a closer look at the ‘special pen’ that will ink India’s future and decide the next president of the country.

Before we dive into the matter of the pen that will be used for the Presidential polls, let’s take a look at the history of using ink in our elections.

Time and again, we have seen voters flashing their inked finger to show that they have practised their democratic duty. The use of ink, is as old as the practice of elections itself.

According to reports, once applied, the purple-coloured ink does not rub off for at least 20 days and can’t be removed even with chemicals, detergent, soap or oil.

According to reports, the main ingredient of the ink is silver nitrate, the concentration of which ranges from seven per cent to 25 per cent, which reacts with the skin protein and makes a strong bond. The silver nitrate can produce a stain that can last for several weeks.

In 1962, the Election Commission, the Ministry of Law and Justice, National Physical Laboratory and National Research Development Corporation entered into an agreement with Mysore Paints and Varnish Limited (MPVL) for the supply of indelible ink for Lok Sabha and Assembly elections. The ink was first used in the 1962 general elections and till date is the sole supplier of indelible ink for elections.

All about Mysore Paints and Varnish Limited

Since 1962, the Mysuru-based firm Mysore Paints and Varnish Limited (MPVL) has been the only firm to provide the ink for all elections conducted in India.

The company was established in 1937 as the Mysore Lac and Paints Limited by the Maharaja of Mysore, Nalwadi Krishnaraja Wadiyar. It began as a company manufacturing paints and related products.

By 1947, the company was handed over to the government of Karnataka and it was converted into a public sector unit. Its fortunes changed in 1962 when the Election Commission of India in collaboration with the law ministry, national physical laboratory and National Research Development Corporation (NRDC) signed an agreement for the supply of indelible ink for the elections.

Initially, the company provided the indelible ink only for parliamentary and Assembly elections. However, with years passing by, the company began supplying the ink for polls to municipal bodies and cooperative societies also.

The indelible ink is a huge money-generator for the firm; in January, reports stated that the company had dispatched around 5 lakh bottles for the five-state Assembly elections — Uttar Pradesh, Punjab, Goa, Manipur and Uttarakhand — held in the months of February and March. This order earned the company a revenue of Rs 8.9 crore.

Another product that they are proud of is the lead-free paint they created in 2010 to decorate clay idols for the Ganesh Chaturthi festival.

MPVL has also been tasked with supplying marker pens for the election to the country’s highest office.

These special pens were used for the first time during the Presidential election in 2017.

Moreover, each pen can apply a mark on 1,000 voters and is convenient to carry.

MPVL Managing Director Kumaraswamy told The Hindu: “The EC has told us to keep the marker pens ready for the elections. We are yet to get the number of pens to be supplied besides other details. We are awaiting further information from the EC but the production of the pens has begun.”

The Star of Mysore further reported that the Election Commission was mulling using the marker pens for future elections and phase out the ink vials.

According to officials, the markers are easier to transport, user-friendly and economical. Sometimes, while transporting, the indelible ink vials leak and there were complaints of wastage and spill-over. With the marker pens there are no such fears and it is convenient to carry and to apply on fingers. Moreover, it also saves the time of polling booth officials.