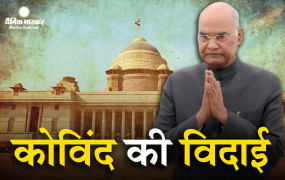 Kovind said this in the farewell ceremony

President Ram Nath Kovind said in the farewell ceremony that the new India of Ambedkar’s dreams is being built. People are getting pucca houses and water. Swachh Bharat Abhiyan is very important. Countrymen are getting their dream flight. Political parties should work beyond party politics. He said that many old memories are cropping up on this day. The President said that the Parliamentarian and the President are co-travellers of the same development journey. Our Constitution, adopted by the people of India, has been authorized. I see the President as an integral part of the Parliamentary family.

Draupadi Murmu, the newly elected President of India, will take the oath of office on July 25. She will take oath as the country’s 15th and first tribal woman president. The swearing-in program will start at 10.14 am on Sunday. Elaborate arrangements have been made for the swearing-in of India’s first tribal woman President. On Thursday, NDA candidate Draupadi Murmu had won by defeating opposition candidate Yashwant Sinha by a huge margin. Draupadi Murmu has created history by becoming the first woman tribal president of India.

These smartphones will knock in India before the festive sale

PTI Long March will not be allowed to enter Islamabad, Interior Minister

These smartphones will knock in India before the festive sale

PTI Long March will not be allowed to enter Islamabad, Interior Minister