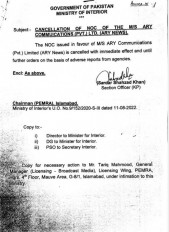 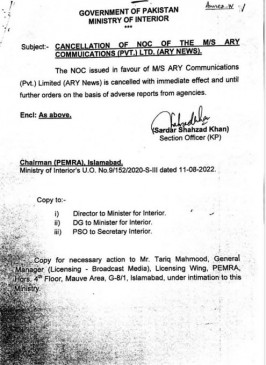 Digital Desk, Islamabad. Pakistan’s Home Ministry has canceled the no-objection certificate of ARY News. The television network gave this information on Friday. The Pakistan Muslim League Nawaz (PML-N)-led coalition government has taken another step towards the economic killing of the journalist fraternity by canceling the NOC of ARY News, the channel reported. New RY News said that revoking the NOC would mean financial killing of over 4,000 media professionals associated with the news channel.

The move comes after the broadcast of a controversial statement made by Pakistan Tehreek-e-Insaf (PTI) leader and Imran Khan’s chief of staff Shahbaz Gill on ARY News. The channel had also issued a clarification that Gill’s statement is his personal opinion and has nothing to do with the channel’s policy. The channel’s administration condemned the suspension of its broadcasts, saying the network was being harassed by the federal government.

On 10 August, the Sindh High Court (SHC) ordered the Pakistan Electronic Media Regulatory Authority (PEMRA) to immediately resume broadcasting of the channel across Pakistan. The channel was shut down in many parts of the country on Monday evening by the authorities without any prior notice. ARY News reported that the SHC bench heard the petition regarding suspension of ARY News and issued directions to the cable operators to immediately resume the telecast of the TV channel. The court, in a 10-page order, had also suspended the show cause notice issued by Pemra to ARY News. It also stayed the suspension of the license of the TV channel till the next hearing. The court had also issued notices to Pemra and the deputy attorney general and adjourned the hearing till August 17.

Disclaimer: This is a news published directly from IANS News Feed. With this, the team of bhaskarhindi.com has not done any editing of any kind. In such a situation, any responsibility regarding the related news will be with the news agency itself.