HomeWorldPakistan hands over another consignment of aid to Afghanistan
World

Pakistan hands over another consignment of aid to Afghanistan


Pakistan on Wednesday handed over seven truckloads of humanitarian assistance to the people of Afghanistan at the Torkham crossing as part of its efforts to provide relief to them as harsh winters set in.

Pakistan has repeatedly urged the world community to reach out to Afghans in urgent need of food, medicine and shelter as in the absence of a recognised government, the people of Afghanistan are the worst sufferers.

Prime Minister Imran Khan has already announced Rs5 billion package for the Afghan people including 50,000 metric tonnes of wheat. Pakistan as a goodwill gesture also allowed the transit of wheat from India to Afghanistan.

Dr Yusuf, in a series of tweets, said that geo-economics is a reality and so is the government’s efforts to translate this vision into the kind of reality that would affect each and every Pakistani positively in years to come.

He said that earlier this week, the prime minister chaired the apex committee meeting of the Afghan coordination cell, and on his directions, the cell was at the border today to ensure progress in removing each and every bottleneck for trade and connectivity from Torkham. 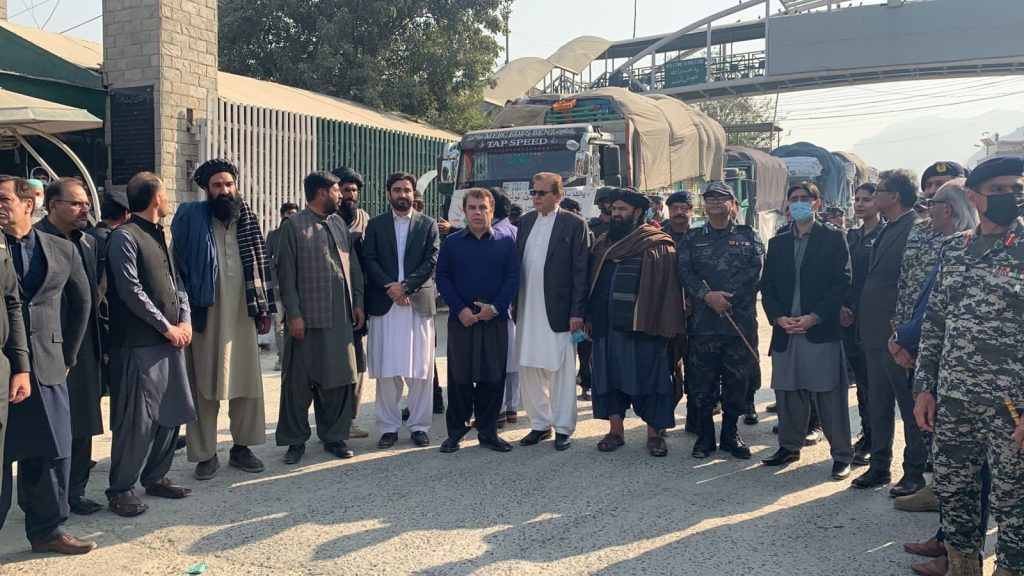 The NSA also said that as far as the westward connectivity is concerned, Torkham is one of the key future gateways through which Pakistan is helping join the Central Asian Republics, Russia and Eurasia to the “warm waters” and pointed that “this isn’t just talk”.

He recalled his visit to Torkham with his Uzbek counterpart along with Adviser to Prime Minister on Commerce and Investment Razak Dawood a few days back to witness the first consignment of Uzbek yarn come across the border.

Dr Yusuf said that multiple bilateral and multilateral agreements, needed to make this happen, are being put in place. “Our trucks are already ploughing the route all the way to Turkey. More of this will become the norm.”

He said that during his visit to Torkham, at the Khyber Rifles (KR) mess, a critical benchmark of success of connectivity and geo-economics became apparent to him as he walked through the corridors of the mess and was surrounded by incredible history.

“From British to American to the Arab world to Africa, leader after leader has visited KR and the Torkham border over the years. The picture gallery leaves no doubt of this area’s continued global strategic importance.”

The national security adviser, however, pointed out that the thing that strikes was that virtually every Western leader visited the location because of war or turmoil going on next door in which their countries had a direct stake.

“The Great Game if you will! This pattern goes back decades and decades.”

He said the best testament to Pakistan’s successful switch to geo-economics would be if the border was frequented by trade and commerce ministers of major regional and extra-regional countries.

He said that with the opening up of the route they would have real economic stakes in connectivity through this region and would therefore genuinely seek peace here. “That’s it: as KR’s walls fill up with such visitors, we’ll know we are getting where we want to.”

Omicron: Why is Nigeria on the travel red list?

Omicron: Why is Nigeria on the travel red list?

Travelers to U.S. Now Must Test Negative for Covid a Day Before Flying

Copyright © 2021. The Blog 101, All Rights Reserved | For any Copyright Issue Contact Us