It is very difficult for China to conquer Taiwan! Taipei’s geography is ‘armor’ with defense 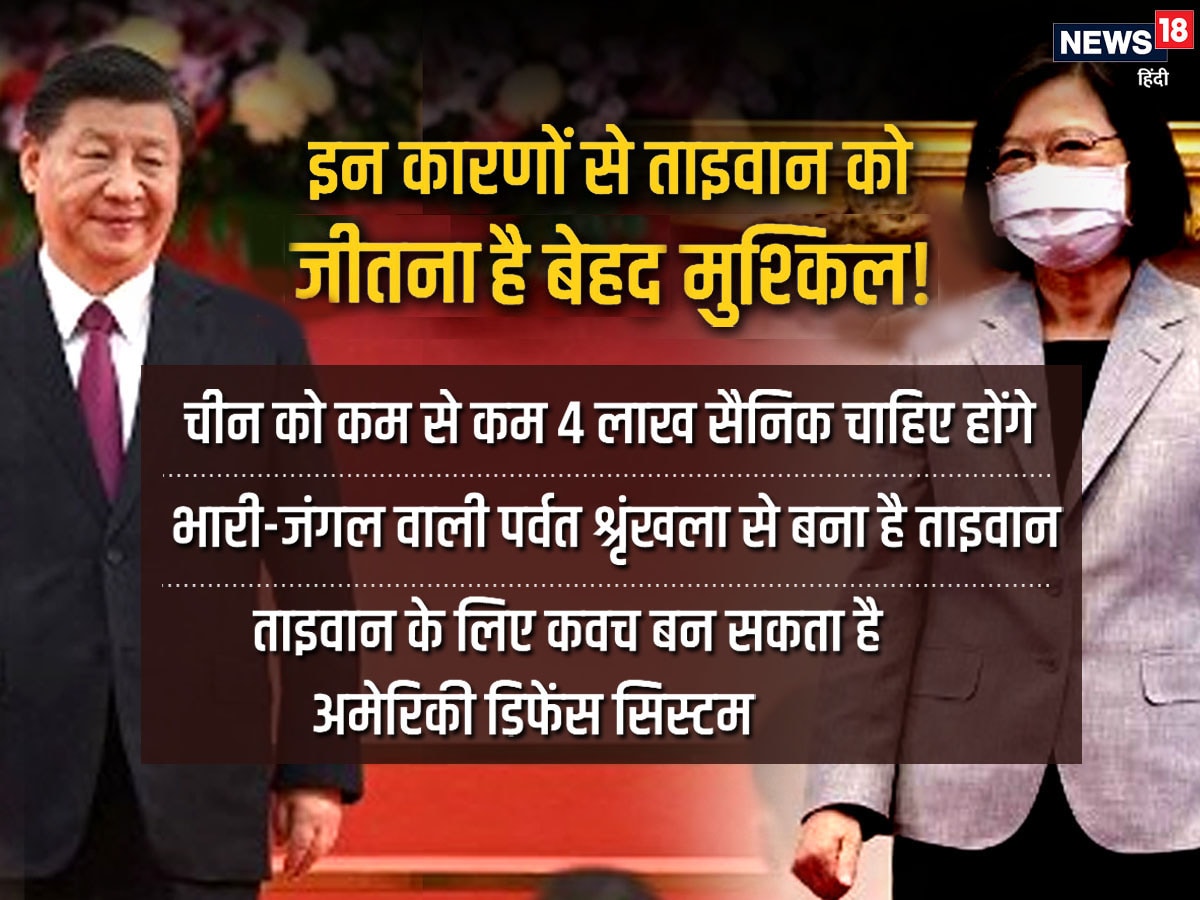 These aircraft are capable of taking off and landing through wide tunnels cut in the mountain.

Taipei, Angered by Nancy Pelosi’s visit to Taiwan, China has increased its activities in the Taiwan Strait after threats of military action on Taiwan. China has started its military exercise just 16 km away from Taiwan. China is seeing the visit of the Speaker of the US House of Representatives to Taiwan as an attack on its sovereignty. After China’s aggressive stance, let us know that if China invades Taiwan, then how difficult it can be for it to occupy Taiwan?

According to a report by Al Jazeera, Taiwan, formerly known as Formosa Island, is officially called the Republic of China. After being defeated by the victorious Communist army of Mao Zedong, the Nationalist Kuomintang, with their army, settled on Formosa Island in 1949. However, since then China has been claiming Taiwan as its share. Because of China’s ‘One China Policy’, no major country has yet recognized Taiwan as a separate nation.

Taiwan’s distance from China is the real problem
The 128-km-wide Taiwan Strait between China and Taiwan gives Taiwan enough time to exhaust and defend the Chinese army. However, the place where the Chinese army can land its ships is located far away. Even if we talk about airlift, China can land only a few thousand soldiers in Taiwan by air. He will need a ship to send his soldiers and weapons in large numbers. According to the report, China will need at least 4 lakh soldiers to capture Taiwan. China can transport these soldiers to Taiwan only by hundreds of its ships.

This massive Chinese fleet will only be able to advance slowly and can easily come under attack from Taiwan’s long-range missiles, airstrikes and submarines. The fastest way to unload all the troops, weapons, vehicles and supplies needed for a successful operation of this vast fleet of Chinese ships would be to use the facilities at the occupied ports. But capturing these ports will also be a challenge in itself.

To land even weapons and troops brought by the Chinese Air Force, China will need to take possession of Taiwan’s airports, which is finding it difficult in the face of the deadly air defense system provided by the US.

Taiwan’s geography is a big problem
Even after overcoming the challenge of Taiwan Strait and ports, the Chinese army may have to fight a lot in front of Taiwan’s geography. Taiwan is made up of a heavily-forested mountain range, which extends for a distance of 395 km from north to south. To the west of the mountain range are fertile plains and large cities. Taipei, the capital, is to the north, Taichung is at the center and Kaohsiung is spread out to the south, forming a natural defensive barrier that would extremely slow any attack by the People’s Liberation Army (PLA) of China. The entire western part of the island is filled with rivers and canals.

There are only a few such beaches in Taiwan, where the Chinese Navy can land its ships. At the same time, China will have to attack with full force because Taiwan’s skilled army can retaliate with deadly retaliation from the tall buildings around these beaches and the high cliffs overlooking the beaches. But the Republic of China is not only the main island of Taiwan, it also includes many smaller islands spread across the Taiwan Strait. Some chains such as the Matsu and the Kinmen are located on the coast of China. The other main island chain, Penghu, is an archipelago of 90 islands. Off the coast of Taiwan, this would be a deadly obstacle to any invading force. The islands are full of ship and anti-aircraft missiles, early warning radar systems and well-trained troops.

In such a situation, they can easily detect the presence of a large fleet of China and are capable of inflicting great damage on the Chinese army by attacking on time. Modern radar on the islands is also able to inform the army on Mainland Taiwan about such attacks in time.

trained to attack
Taiwan’s army is undoubtedly smaller in size than the PLA, but it is well trained to deal with any attack by China. Most of the weapons with the Taiwanese army are available only to prevent any attack. The United States also sells only defensive weapons systems to Taiwan. According to the International Institute of Strategic Studies, Taiwan’s armed force has 163,000 active troops and over 1.6 million reserve troops. Although the Taiwanese army looks very small in front of the two million soldiers of China. With 20 lakh 35 thousand active personnel, the PLA is the largest armed force in the world.

Taiwan’s popular parkupine strategy
Taiwan has absolutely no doubt that its military cannot compete with China. In such a situation, Taiwan has made its defense so powerful that it can drag the war for a long time. Taiwan’s large stockpile of anti-air, anti-tank and anti-ship weapons and ammunition have bolstered the Parkupine strategy.

Parkupine strategy is used to prolong any war against the enemy and to increase its cost manifold. In such a situation, the attacker also has to think many times before attacking his enemy. China is also aware of Taiwan’s parkupine strategy. He knows that the occupation of Taiwan is going to cost him dearly, which will not be compensated for many years to come.

According to the report of RAND Corporation, to implement its strategy firmly, Taiwan has built a total fleet of 411 fighters, of which about half are modernized US F-16 and French Mirage 2000 fighter aircraft. In this episode, Taiwan’s ground crew is considered to be the most trained crew in the world, capable of repairing a completely ruined runway in just three hours. They are taught to repair and maintain their aircraft 24 hours a day, so that even technically damaged aircraft can be used.

Underground airport and military command center
According to the report of the South China Morning Post, Taiwan’s fighter planes are very well protected with several underground airstrips. These military bases are buried deep within the mountain ranges of Taiwan. In such a situation, it will be very difficult for China to harm Taiwan’s army. Let us tell you that Taiwan’s fighter aircraft is capable of taking off and landing from wide tunnels cut in the mountain. These fighter planes can surprise the Chinese army at any time. One such Heng Shan military command center has been built under a mountain near Taipei, in which thousands of soldiers can work together. With these military commands, Taiwan’s army can launch a very deadly attack on China.

Also, these underground complexes have direct contact with the US Indo-Pacific Command based in Hawaii, who can inform the US about any attack in time. One such center operates from the tunnels of the extensive Chihang Air Base built in the Stone Mountain complex. Refueling facility is also available in jet planes here.

What to know this week

What to know this week