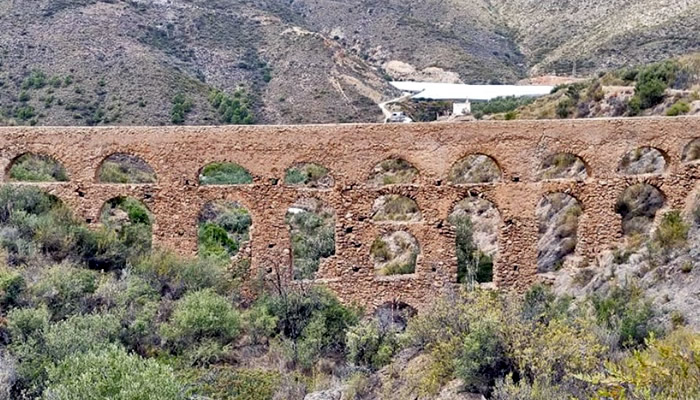 Andalucia’s Ministry of Culture will protect the Carcauz Aqueduct in Felix and Vicar as a Site of Cultural Interest.

This incredible ancient structure is located in the Almerian municipal terms of Felix, and will be listed as a Site of Cultural Interest (BIC).

The Carcauz Aqueduct is a hydraulic complex that runs for nearly 3.2 kilometres along the slopes of the Rambla de Carcauz-Casablanca. This is one of the main channels that, coming from the peaks of Sierra de Gador, in the municipality of Felix, transports the waters to the plains of the old Campo de Dalias, above the municipality of La Mojonera, where its route ends.

Eloisa Cabrera, the territorial delegate for Culture and Historical Heritage in Almeria, explained that this heritage asset will have the highest degree of protection, that of the BIC. The Junta de Andalucia has the objective of “protecting and disseminating this great legacy”, he assured.

He added that: “The Ministry of Culture and Historical Heritage has started the procedure, justified by the relevance of this asset. We could be facing one of the best-preserved examples of a Roman aqueduct in the country. Its transcendence will be a testimony of one of the oldest practices of extraction and conduction of water in the Campo de Dalias region”.

Made up of channels excavated in the earth or in the rock, the aqueduct has a catchment system in the springs of the upper course of the Rambla de Carcauz. At the moment – and this is how it appears in the file – no underground galleries or mines have been documented to capture water from the aquifer.

To identify and delimit the property, an archaeological survey, an aerial photography reconnaissance, and a topographical survey were carried out. The aqueduct runs parallel to the bed of the Rambla de Carcauz, marking out and marking off the limits of Felix and Vicar for much of its course.

The delimitation begins at the Arco de los Poyos and ends at the so-called Balsa del Molino. Between both elements are the arcades of the Puente Retamar and the most monumental, the Acueducto de los Veinte Ojos.

Thank you for taking the time to read this article. Do remember to come back and check The Euro Weekly News website for all your up-to-date local and international news stories and remember, you can also follow us on Facebook and Instagram.