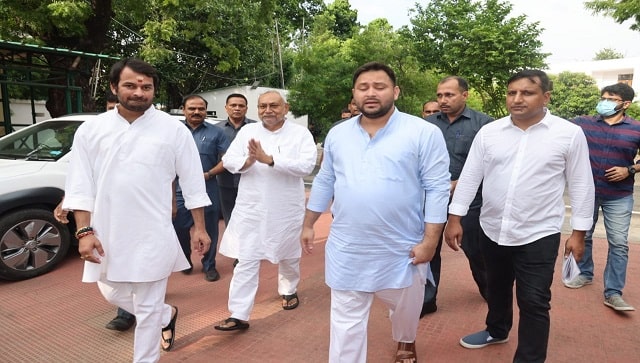 As Janata Dal (United) chief Nitish Kumar ended the alliance with BJP, Samajwadi Party (SP) chief Akhilesh Yadav on Tuesday termed the transfer as a ‘good begin’ in the direction of taking a stand in opposition to BJP by political events and other people As Janata Dal (United) chief Nitish Kumar ended the alliance with BJP, Samajwadi Party (SP) chief Akhilesh Yadav on Tuesday termed the transfer as a “good start” in the direction of taking a stand in opposition to BJP by political events and other people

Kumar, earlier within the day, held a gathering with the JD(U) leaders to focus on his subsequent future political strikes. He then sought time from Governor Phagu Chauhan. Around 4 pm, Kumar arrived at Raj Bhavan and met Governor Phagu Chauhan and apprised him of his decision to stop because the state chief minister.

This comes as parallel conferences of the JD(U) which helms the Bihar authorities, and the Opposition RJD happened amid speculations of a significant political transfer by Nitish Kumar. The assembly of JD(U) MPs and MLAs happened on the chief minister’s official residence, social gathering sources mentioned.

The assembly of the RJD legislators was convened by social gathering chief Tejashwi Yadav at his mom Rabri Devi’s Circular Road bungalow, a stone’s throw from the CM’s Anney Marg residence.

On the opposite hand, the BJP additionally held a gathering at Deputy Chief Minister Tarkishor Prasad’s residence and amongst these current have been social gathering’s state unit president Sanjay Jaiswal.

More than one of many potential attendees of the JD(U) assembly denied that the social gathering’s ties with the BJP have worsened to an extent to name for a realignment.

“Our party had held many such meetings of MPs and MLAs in the past. We have been told that the current meeting has been called to discuss organisational matters. Never heard about any major crisis in the NDA,” mentioned Ram Nath Thakur, a Rajya Sabha member.

Another confidant of Kumar, Leshi Singh, who’s an MLA and a minister in his cupboard, mentioned, “I was away for the last four or five days but I have an idea of how things have been. There does not seem to be any major crisis facing the NDA government. It goes without saying, though, that the party will abide by any decision taken by the chief minister.”

Chetan Anand, a younger RJD MLA who’s serving his first time period, mentioned, “Rumours of political realignment have been afloat for a couple of years. Let us not make any rash assumptions. Once the party leadership takes any decision, it will be definitely made known to all.”

Meanwhile, Congress’ Ajit Sharma mentioned, “If Nitish Kumar comes, we’ll welcome him. If he comes we will support him. A meeting of Mahagathbandhan is being held. We should take a decision to support (him) by considering Nitish Kumar as the CM but we’ll be able to tell you only after the meeting.”